Generous grants awarded by the S.J. Quinney Foundation and the National Endowments for the Arts have enabled the Moab Music Festival to embark on a three-year education initiative. In addition to the Festival’s ongoing Education Outreach Program, which reaches all Grand County school children and many Moab adults, the new initiative will provide for year-round music education in the community.

At the core of the new initiative is clarinetist/saxophonist/composer Eric Thomas, who assumes the position of Artist-In-Residence. Eric will spend thirty weeks in Moab each year working with the program’s partners: the Grand County School District, the Moab Arts and Recreation Center (MARC), and the Moab Repertory Theater.

Eric (or ET as we call him) will also be active on Moab’s KZMU Radio, providing his DJ expertise in classical and jazz programming. Central to Eric’s residency is a 2002 summer-long program with classes and musical activities at the MARC for kids and adults, live and original music for a Moab Repertory Theater production, and Music Festival concerts in June and September. Eric will continue as Director of Band Activities at Colby College in Maine, but will also have a winter presence in Moab to work with school kids and give adult classes at the MARC in classical music and jazz. Eric has been a mainstay of the Festival having appeared on all eight previous seasons and returning in September for his ninth. He is well known in the community and we consider ourselves fortunate to have his commitment and dedication in helping us enrich the lives of Moab’s children and adults.

Building on the success of the Marian Anderson String Quartet residency in the spring of 2001, the Festival is working with the school board and administration to assist in re-building the strings program in the schools. It has been a long-term goal of the Moab Music Festival to involve as much of the community as possible, with a special emphasis on school aged children. These new grants will allow us to realize these goals with a three-year plan, which we believe will be just the beginning. Special thanks go out to our partners, the S.J. and Jessie E. Quinney Foundation, the N.E.A., Eric, and all of the Festival patrons who support our programs and efforts.

Pictured here are students of the MMF Education Outreach program performing with the Festival's musicians at the Family Concert in Old City Park. 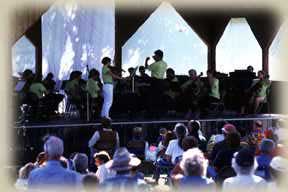 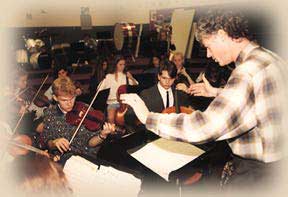